My engine won’t make oil pressure after sitting for 3 weeks!

Loss of prime of the oil pump is a fairly common occurrence in small Continentals (A- and C- series and O200).  There is some significant anecdotal evidence to suggest that the problem is more prevalent or exacerbated by installation of the F&M oil filter adapter. I have never heard a reasonable explanation for this, but there are too many complaints to ignore.  Regardless, bottom line, the root cause of the problem is excess clearance in the oil pump that allows oil to drain back into the sump and also makes it more difficult for the pump to draw a vacuum and pull oil up from the sump.

The whole point of any procedure is to get oil into the pump to seal it and allow it to draw oil from the sump.  Piper Cubs and other similar aircraft sans electrical systems, with the -8 engine, retain a small amount of oil in the oil screen housing, which is higher on the case than the pump outlet. Because they sit in the 3 point attitude, the oil stays in the screen housing.  Lifting the tail high in the air allows this oil to flow back into the pump, effectively priming it. This procedure only works on the -8 engines, though.

So, what if you don’t have a -8 engine?  How do you introduce oil into the pump to reseal it and get things going again?  One way is to introduce oil through one of the several orifices that connect with the oil system.  However, other than the oil cooler pad (where the F&M filter adapter is installed), all the other orifices where oil can be introduced are lower than the passage to the pump outlet, so injecting oil into the pump is an "uphill battle".

Some folks have had success pumping oil into the oil screen housing through the hole for the temperature probe.  Others have used the oil pressure port on the side of the case.  In either case, you have to pump oil in with enough pressure to get it to flow uphill and into the pump.  Also, when you do this you are introducing unfiltered oil to the engine side of the screen. 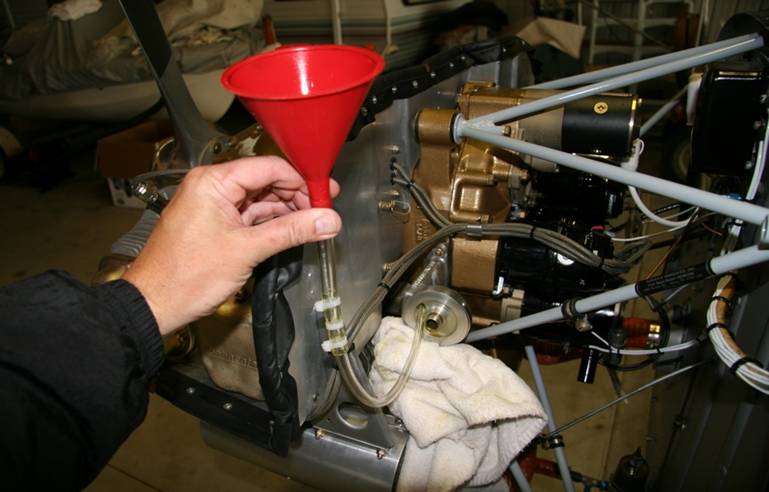 If you have the F&M oil filter, one way that works well is to remove the filter and squirt oil into the filter adapter, which is higher than the pump.  Oil introduced here will make its way down to the pump and get things sealed up again.  The oil needs to be introduced into the outside hole, not the one that connects to the center of the filter, in order to reach the pump and also keep the unfiltered oil on the unfiltered side of the filter.  If you go this route, be sure to re-torque the filter and reinstall the safety wire.

If you use either of these methods it may help to rotate the prop backwards to assist in pulling the oil back into the pump.

So, what to do, especially if you don't have an F&M oil filter adapter?  Here's a fairly easy, not too messy procedure that has worked every time for me.

What do you need?  A wrench to remove the oil pressure line from the engine fitting. A spark plug socket and appropriate hardware to turn it. A torque wrench to reinstall the spark plugs.  A wrench to hold the plug wire and another to turn the nut holding the wire on the plug.  A piece of hose or plastic tubing that fits over the breather tube for the engine, 5/8" ID, about 4' long.

What to do?  Install the plastic tube or hose onto the end of the crankcase vent.   Remove the oil pressure sense line from the fitting on the engine case.  Remove the 4 top plugs from the engine.  Take precautions to ensure nothing falls into the plug holes.  Position yourself where you can reach the starter actuator, and see the oil pressure fitting on the engine case.  Put the free end of the plastic tube in your mouth.

Be sure you are standing clear of the prop arc!

Blow into the tube and operate the starter motor while watching the oil pressure fitting.  (If you do not have the “pull type” starter, you will need to jerry rig a way to actuate the starter. This is left as an exercise for the student.)  The air pressure in the sump will push oil up the pickup tube into the pump. You should see oil coming out the pressure sensor port in 20 seconds or so. If after 30 seconds of cranking you do not see oil, stop and allow the starter to cool for 2 minutes, then repeat. I have never had to repeat more than once.  As soon as oil comes out of the oil pressure sensor port, you are done. Reconnect the oil line, reinstall and torque the plugs, remove the plastic tube from the breather, button up the cowl and go fly.

When this gets to be too much of an aggravation, pull the accessory case off and figure out what's wrong with the oil pump.